Informations on the culture of Angraecoids


The genus Angraecum has been created in 1804 by a french botanist, Colonel Jean Baptiste Bory de Saint Vincent.


The name Angraecum comes from a Malay word, " angurek ", used in South-East Asia to indicate the epiphytic orchids which shape looks like that of Vanda.
It counts 210 species today among which approximately 75 % are native of Madagascar.

Around thirty species come from continental Africa and some species find themselves on the islands of Indian Ocean (Mauritius Island, The Comoros, Reunion, Seychelles).
This diversity makes impossible a general note of culture, although most of the species need a strong hygrometry and a moderate shade.

The name Aerangis has been created by H.G. Reichenbach from the Greek word aer, air and angos, receptacle, probably in reference to the long spur, characteristic of these flowers.

This genus counts 31 species on the African continent, 21 in Madacascar, 5 in the Comoros and 1 in Reunion. Last one species is observed in various places along the East coast of Africa and in Sri Lanka.

Jumellea:
The name Jumellea was created in homage to a French botanist, Henri Lucien Jumelle (1866-1935), professor of botany in Marseille, who collaborated a lot with Henri Perrier de la Bâthie but without ever going to Madagscar. This genus counts about sixty species today, distributed between East Africa and islands in Indian Ocean.


The name Aeranthes  was coined from two Greek words, aer, or "air" and anthos, or "flower", undoubtedly in allusion to the fact that the flowers are "blowing in the air", unattached to any plant.
This genus was established by John Lindley in 1824.
About 50 species are now recognized, mostly in Madagascar,several from the nearby islands and two in Africa.
Aeranthes angustidens
Aeranthes caudata
Aeranthes grandiflora
Aeranthes peyrotii
Aeranthes strangulata


The name Neobathiea was created in homage to a French botanist, Henri Perrier de la Bâthie (1873-1958).

This genus counts today 5 species, only present in Madagascar

The flower of the moment 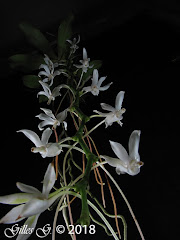 Madagascar in situ - Other orchids